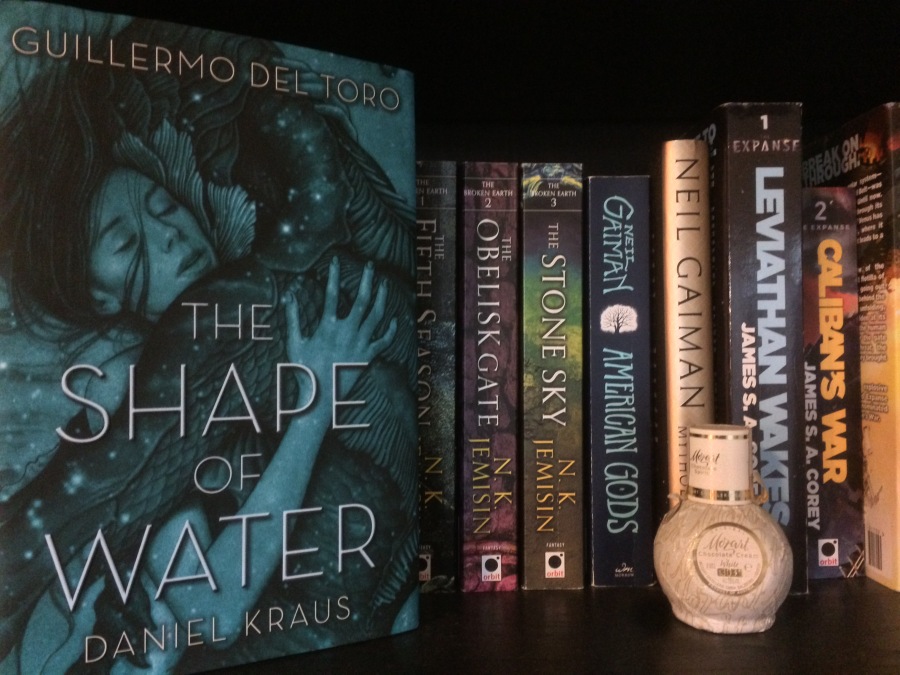 Romance literature can easily seem like a stale genre.  There are certain beats and plot points which we know most romance novels will follow.  We know the characters long before we open the first page or even learn their names.  There is an entire industry based around this, and authors take full advantage of our desire to experience love vicariously.  The male and female protagonists—and there are nearly always white—may fall in love at first sight.  The entire world may try to get in there way.  There will be a sex scene, or multiple, described in such circumstantial language so as to not appear pornographic.  The Shape of Water novel is not like this.  These are characters you have never met, experiencing life and love in different ways.  Even the sex is new and strange and different.

Before I get too much into the book, no discussion of this story is complete without first mentioning the film.  Winner of Oscars for Best Picture and Best Director, among others, the film version of this tale is beautiful.  It follows much the same story, with subplots and character beats cut to fit into more appropriate run time.  To film this book, page for page, would be to film a ten-hour movie.  By now, most of you have probably seen this film, but here is a spoiler warning nonetheless.  In The Shape of Water, Elisa Esposito is a mute janitor working at a secret government facility, Occam.  Her best friend is Giles, a gay artist, and she is close with her fellow janitor Zelda, an African-American woman.  One day, Richard Strickland arrives with a human-like, amphibious creature, much like Abe Sapien in Hellboy or the creature from the black lagoon.  Elisa and the creature fall in love, she breaks it out with the help of Giles and Dimitri Hoffstetler, lead scientist on the creature and Soviet spy.  Eventually, with Strickland in pursuit, Elisa manages to bring the creature to the ocean and joins it beneath the waves.

If that summary appears too brief, lacking in crucial information, it is because I want you to feel what I felt when watching the film after reading the book.  It is almost unfair to compare, but the novel just has so much more.  We learn more about the characters, we see more of their lives, we see Strickland’s journey to capture the creature, and we feel more of what they feel.  To accomplish all that, Daniel Kraus infuses his prose with raw emotion and a sense of dreaminess.  Like the world we are seeing through the pages is not quite real, and yet painfully real at the same time.  Some of this dreaminess comes across in the film, especially when we are with Elisa.  But, in the novel, the whole story is presented in this dream-like state.  Each of the characters are so in their own heads that they move throughout the world asleep, only seeing what they want to see around them.  In some cases, encounters with the creature breaks a character from their revelry.  In others, it drives them further into madness.

Every point-of-view character in this novel has a very different tone and feel to them, something many authors would struggle with.  Kraus makes sure we can very clearly tell whose head we are in at any given moment.  Elisa moves through the world in her own way, while Giles’ chapters contain a pervasive sense of growing older and frailer.  We feel Hoffstetler’s conflict and we embrace his elation when he learns the creature may be intelligent after all.  In fact, we spend almost as much time in his head as we do Elisa’s.  And then there is Strickland.  The novel actually opens with his story, a tale of a fever-ridden journey into the deep Amazon to hunt Deus Branquia, the gill-god.  His superior, General Hoyt, is never seen or heard.  His words, as recalled by Strickland, are censored from the text.  His threat to the story lies mostly in his hold over Strickland’s sanity.  As Hoyt’s intentions for Deus Branquia become more obvious, Strickland loses more and more of himself, figuratively and literally.  His mind, his fingers, his patience, his love.  We are with him through every painful moment.

After reading the novel and watching the film, I must admit that I find the creature’s portrayal in the novel to be more nuanced and creative.  The creature in the film is never given a name, we do not see it interacting with Elisa past simple gestures and the sex scenes.  It is questionable as to whether it fully understands her.  It is more bestial in nature as well, devouring on of Giles’ cats.  In the novel, this is a god.  We watch Strickland encounter its worshipers in the Amazon.  It does not murder the cat; rather, the cat offers itself up as a sacrifice to nourish Deus Branquia.  It displays a supernatural control over water, and all animals bend the knee.  With the few chapters we spend in its head, we understand the intelligence of the thing.  It feels, it understands, it loves.  It shows real remorse after eating the cat and injuring Giles.  In the film, it’s act of healing Giles is almost random, like a dog licking its owner’s face.  In the novel, Deus Branquia is desperate to express sorrow and regret for its actions.

The Shape of Water is, first and foremost, a romance.  There is action, suspense, a touch of spy thriller spread throughout.  But it is romance which binds all characters together.  The romance between Elisa and Deus Branquia takes center stage, and it is love in its purest form.  Despite all their differences, they fundamentally understand each other.  When the two consummate their relationship, the moment is not a shock or surprise.  It is an inevitability.  Of course these two people, so deeply in love with each other, would have sex.  However, the novel is also introduced in other forms of romance, as well as the lack of romance.  Zelda spends most of her conversations with Elisa complaining about her husband, Brewster.  Giles pines after a young waiter, up until the man learns Giles is homosexual.  Strickland steadily loses his love for his wife, Lainie while succumbing to his madness, while she falls in love with her newfound independence.  Even Hoffstetler’s story has an undercurrent of romance.  He loves Russia, his home, and wants nothing more than to return and see his family again.

The moral of this story is a simple one: love can be found anywhere, at any time.  It may be when you least expect it, it may be when you think your life is at its lowest.  It may be a form of love you never expected, with a person you never saw yourself falling for.  Love ignores looks.  Love ignores lifestyle.  Love ignores material possession.  Loves cares about communication in whatever form that may take.  The form itself does not matter, as long as there is understanding and acceptance.  People who have only heard about the story in passing may only know it as the fish sex story.  But The Shape of Water is so much more than that.  This is love incarnate.  And water, like love, has no shape.

The Shape of Water may be found in store, online, or wherever books are sold

Next on the List: The Last Equation of Isaac Severy, by Nova Jacobs