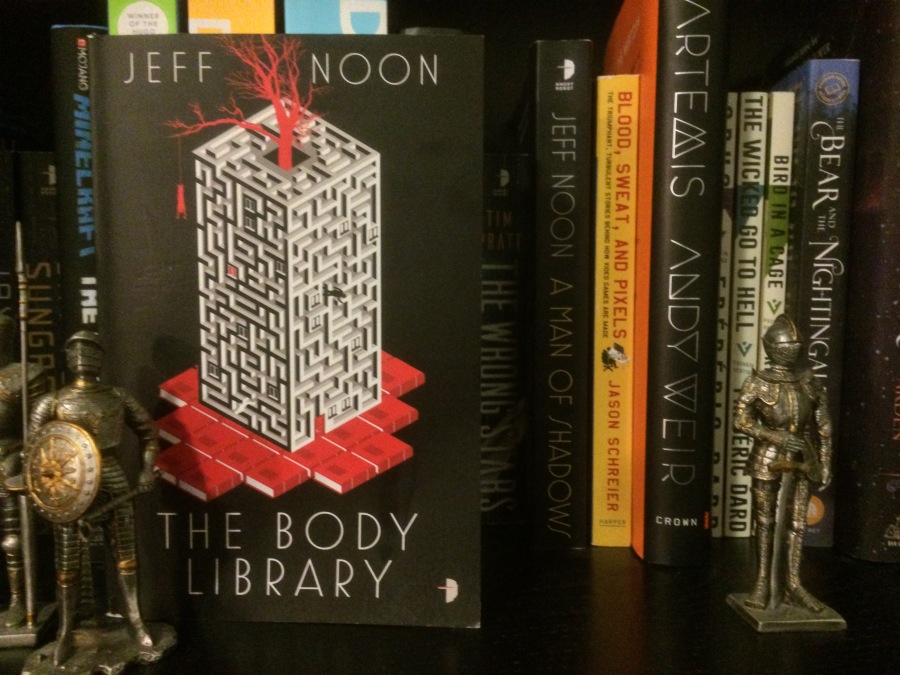 Storytelling is not defined.  Yes, we all know how to structure a sentence.  When to use a comma instead of a period.  The difference between quotation marks and apostrophes.  We learn grammar in school classes, listening to someone stand at the front of the room and lecture about how important it is to know when to use “it’s” as opposed to “its.”  All of those are components to storytelling, but they are not stories.  You may have heard somewhere, half-remembered, that a story needs a beginning and a middle and an end.  That holds true, until you read something non-linearly.  Sometimes the best stories take all the rules, throw them out the window, and craft something truly special.

The Body Library, by Jeff Noon, is the second book in the Nyquist mysteries series of novels.  The story once again follows private detective and protagonist John Nyquist.  If you have not read the first novel, A Man of Shadows, that is perfectly fine, although I do recommend it.  The second manages to stand alone; only a sequel because it follows the same main character.  In his first novel, Noon created a vivid, uncomfortable look at a city populate by the insane.  The setting of The Body Library could not be more different.  The residents of Storyville are actually well adjusted, not subject to a stifling environment or non-static time.  Life here revolves around storytelling; both listening and crafting are acceptable.  But the fiction is never allowed to take over the non-fictional, to the point of near-fascism.  The main authorities of Storyville are known as the “Narrative Officers,” and they serve a government which monitors every aspect of the residents’ lives, from beginning to middle to end.

It is easy to compare and contrast the two settings John Nyquist has found himself in.  Dayzone, from the first novel, is a city where everyone runs on their own personal timeline.  Insanity was commonplace.  Even John Nyquist was no exception.  Throughout A Man of Shadows, we watch his mental condition deteriorate.  Storyville is a world apart.  Despite the fascist tactics and mass surveillance of the Narrative Officers, there seems to be genuine concern for the well being of their citizens.  Part of their job is to make sure the people of Storyville maintain their grasp on reality.  When so much of your life is based on storytelling, it is easy to get sucked into the narrative and drown in it.  Real life loses its luster and the stories in our heads become more interesting and more engaging.  In our world, there are outlets to internal storytelling.  Video Games, writing, role-playing games.  In Storyville, that does not seem to be the case.  Either you have control over your personal narrative, or you do not.

The John Nyquist in The Body Library is a much more stable person than the John Nyquist we met in A Mans of Shadows.  Leaving the confines of Storyville, where the sky is always hidden, has done wonders for his psyche.  However, he is still lost.  He is without purpose, and not proactive in his own narrative.  As the novel begins, Nyquist has been hired to follow a man named Patrick Wellborn.  He does not research the man, does not try to find out who he is, who wants him followed, or why.  He simply takes the job.  Of course, this is Jeff Noon.  The simple job does not stay simple.  Following Wellborn takes Nyquist into the terrifying and mysterious Melville Tower Five, a seemingly abandoned apartment block where stories go to die.  Inside, he meets a woman named Zelda, taken there by Wellborn for some unknown purpose.  The first act of the novel involves these two characters and their escape from the tower, while the rest of the novel is a murder investigation.  But even calling it a murder investigation is a gross oversimplification of the plot.

The titular book, The Body Library, is a book within a book.  Nyquist first hears whispers of in while in Melville 5, and his investigation circles around it once he escapes the tower.  A book made of the corpses of other books, The Body Library is the sort of book you would read in a college or MFA program class.  It is a book which defies description.  Section of novels, of magazines, handwriting, flotsam and jetsam; the book is unlike anything the citizens of Storyville have seen before.  The Narrative Officers, whose job it is to make sure everyone stays on track and following their narratives, want it destroyed.  The very existence of such an experimental work of literature threatens everything they know about storytelling.  One character even mentions the Dadaists as a possible in-story inspiration for its creation.  Artists who thrived on the concept of chaos.  The book is also special.  Those who burn the pages and inhale the ink are invaded by words.  Ink burned into the skin, words which move and write themselves across sufferers’ bodies.  Something the rational and linear Narrative Officers believe to be a virus transmitted by the burning of psychoactive paper.

Like A Man of Shadows, the novel does not stay mundane for long.  The hints and suggestions of the supernatural soon become very real.  Lightning bugs with the marking of the alphabet fly through the night sky, all but the letter “X.”  Nyquist himself finds words on his skin, moving and shifting like living tattoos.  In many ways, the supernatural is more obvious and easier to understand here than in the first novel.  At a certain point in the novel, there is a hard break in narrative.  Nyquist finds himself in a coma and realizes there is a whole other world inside Melville Tower 5.  A world of fictional characters, himself included.  Copies of real people, all who have been exposed to The Body Library.  They exist inside the tower block, unable to leave, and living a shadow of a life.  They speak of a being named Oberon, a figure from several old-world mythologies.  The king of the fairies.  The titular book, the fictional characters, the cult outside trying to spread The Body Library; all exist in service of him.  Readers will not find a lot of answers to the mysteries of Oberon and his book because, ultimately, John Nyquist is not looking for them.

The Body Library is a more comfortable read than A Man of Shadows, but there is still an air of the uncomfortable in reading it.  It is not something I would call an easy read.  And yet, John Nyquist ends the novel in a better place than where he began.  The central mystery is solved, his mental condition is stable, and he has even made a human connection with another person.  Someone who may actually care about him.  Even the resolution to Oberon and The Body Library has the suggestion of a happy ending, in a sense.  Where Dayzone was a city to escape, Storyville becomes a city to experience.  Every story has a beginning, a middle, and an end.  They may not appear in that exact order, but they are there.  And, while all stories must end, a new story is always beginning.

The Body Library may be found online, in store, or wherever books are sold

Next on the list: The Wise Man’s Fear, by Patrick Rothfuss

One thought on “Midnight’s Ink: A Review of The Body Library, by Jeff Noon”