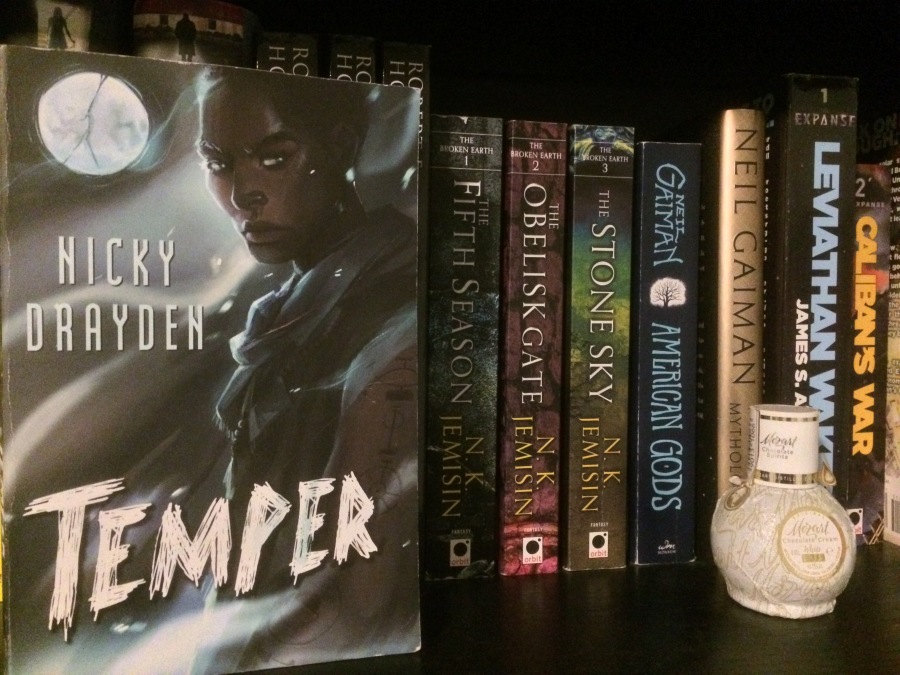 Anyone who reads this blog will know that I read a lot of fantasy novels.  They are the perfect form of escapism, pulling readers into different worlds.  The world can be as similar or as different from our world as the author’s imagination allows.  They can draw on real-world environments, societies, and peoples.  The worlds of fantasy can also be as nontraditional as the author likes.  Medieval Europe is usually the go-to influence, but there are no limits on which culture a book must take to heart.  Asia, indigenous Australia, the middle East, old world America, the Pacific Islands, Africa…fantasy is the excuse to be as non-traditional as possible.  The whole point of fantasy is to create a new world.  Why should that new world be a slave to the rules of the old one?  Create your own world and write your own rules.

Temper is a fantasy novel written by Nicky Drayden and her second novel overall, following her debut with The Prey of the Gods.  Drayden is the rare author to actually work for a living, working as a systems analyst in Austin, Texas.  Authors tend to live inside their own heads for extended periods of time when wholly focused on their writing, but Drayden manages to hold the combination of both creativity and practicality.  Temper takes place in a fictionalized South Africa, or a fictional world resembling South Africa.  She does not go too much into the background of the world because we do not need to know the entire history or the land’s exact location to enjoy the story being told.  But we do know that the book takes place on the Cape and more than resembles the Cape of Good Hope.  The main characters never travel beyond its borders, and the outside world is only alluded to when talking about history.  Other peoples, ancient wars.  These are interesting background features, but ultimately do not hold any sway over the story Drayden wants to tell.

The society of the Cape is definitely an unusual one.  In this nation, twins are prevalent, and it is rare for a child, or singleton, to be born without a twin, either identical or fraternal.  At first, twinning is presented as just an accepted part of their life.  The characters do not seem to question it much, and the most popular theory finds its source in religion instead of science.  There is a passing reference to a different ethnic group from another nation coming up with scientific theories for the twinning, but these are largely dismissed.  But the twinning is just the beginning of the fantasy setting.  In this world, people are controlled by their vices and virtues.  There are seven of each, split between the two twins and tattooed onto their skin for everyone to see.  Twins with more virtues than vices are considered greater twins, while the twins with more vices than virtues are the lesser twins.  There is the assumption that greater twins will always be better people, and the main characters make it clear that there is an underlying bias in their society against lesser twins.  A lesser twin will rarely become a CEO.

Those main characters are the twins Auben and Kasim.  Auben is the lesser twin, with six vices and one virtue.  Kasim is considered the greater twin, with six virtues and one vice.  However, the greater number of vices does not make Auben a bad person in any way, and Drayden introduces a plot point called proximity to show that.  When twins stay close to each other, they exert greater control over their vices and virtues.  Throughout the beginning of the book, Auben shows how vices can actually be used for good purposes.  A duplicitous tongue may lie, but sometimes a lie is better than the truth.  A greedy person will be able to negotiate a good deal on a purchase for a friend.  At first, Temper seems like it will be about these two twins and their relationship in this world.  Their allotment of vices and virtues is unusual, and Auben has trouble with stronger urges than normal.  While the story is about both of them, it is told from Auben’s first-person point-of-view.  We are led to believe that Auben’s vices are stronger than other peoples.  Then, there is the twist.

Temper becomes a story about demonic possession.  At a certain point early on, Auben begins hearing voices in his head, urging him to fully embrace his vices and commit acts of borderline evil.  The voices become too much, and he decides to embrace religion and beseech the god Grace for help.  Instead, the devil, Icy Blue, hears his call and Auben’s inner vices reveal themselves to be a demon.  Icy Blue, the devil of vice himself.  As the demon’s voice grows louder and louder, the temptation to embrace vice grows stronger and stronger within Auben, until he is finally forced to strike a deal with the devil to keep the people around him safe.  Auben hides this from everything, until the book’s second twist.  His twin, Kasim, is also possessed by a demon.  This demon also speaks into his mind, questing everything he does and seeding doubt after each and every action.  Temper transitions into a story about these two possessed brothers and their quest to rid themselves of their true demons.  This plot takes up the majority of the book and this is when the book is at its best.

There are criticisms of the novel, however.  This is only Drayden’s second novel and there is a sense that she is still fine-tuning her style and craft, putting the finishing touches on an otherwise complete creation.  Temper was not a novel which grabbed me immediately.  It took some time to get into the plot and for the plot to become truly interesting.  The opening falls into a weird area where it both tries to explain too much and does not explain nearly enough about the world in which it takes place.  Multiple references are made to the outside world, but never followed up upon.  At a certain point, my curiosity is pulled in that direction since it is clear the Cape is not like the rest of the world.  What must they think of this strange nation?  Plot points are introduced and never followed up or introduced and made irrelevant as the story progresses.  Then, the book really kicks off and embraces the demonic possession of Auben.  However, at a certain point, there is another twist.  I will not spoil it here, since you should read the book regardless of my criticism, but the twist changes the characters in such a way that I found them less interesting.

Despite initial criticisms, Temper is an enjoyable world of fantasy that introduces a truly unique world and tries to do something different enough from traditional fantasy to make it an important step for the genre.  Drayden took a too often ignored are of the world and brought it to the forefront of her story.  Fantasy is meant to be accessible to anyone and everyone, regardless of origin or background.  When creating a new world, there really is no reason to leave someone out.  The fantasy genre is the ultimate tool for inclusivity, and both Temper and Drayden have continued that legacy.

Temper can be found in store, online, or wherever books are sold

Next on the List: Lethal White by Robert Galbraith