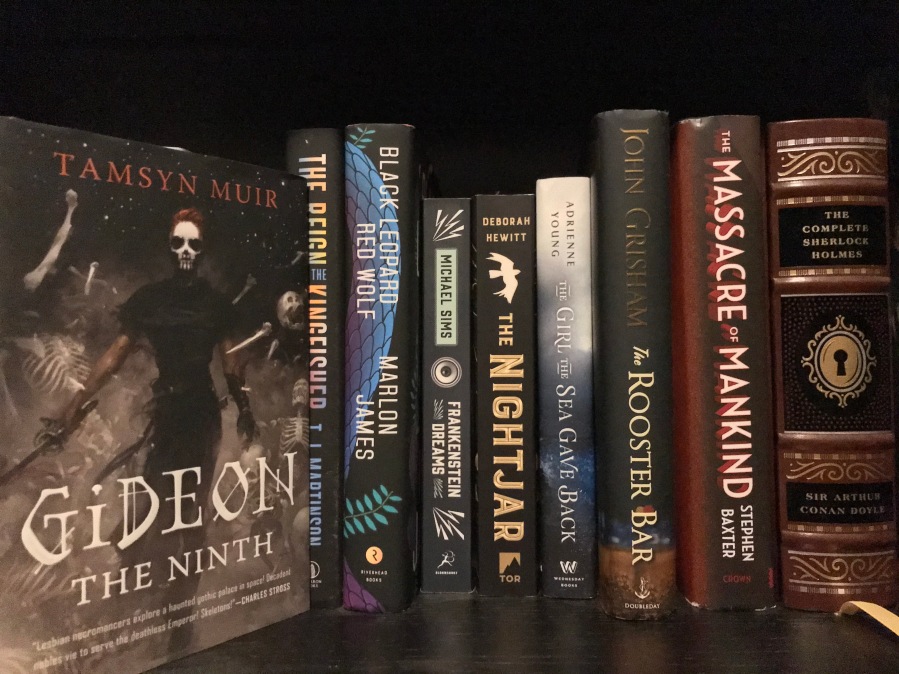 Science-fiction and fantasy may appear to be very different genres at first glance.  Once is full of advanced technologies, with a focus on scientific progress and how that works within the setting.  Fantasy focuses on magic and oftentimes breaking the rules of the physical world in the pursuit of power.  However, the two are full of more similarities than differences.  Both can take place on Earth, or on another world.  The world can have creatures other than humans, be they aliens or elves.  Fantasy can sometimes show technology powered by magic, while highly advanced technology can sometimes appear indistinguishable from magic depending on who witnesses it.  Popular franchises such as Warhammer, Isaac Asimov’s Foundation series, and even Star Wars, all find compelling ways to blend genres.  Gideon the Ninth, by Tamsyn Muir, blends science-fiction and fantasy in a wonderfully gruesome way.

Tamsyn Muir is a well published and fairly well-known author in the world of short fiction.  Her focus has trended towards horror, science-fiction, and fantasy, a trend which continues in Gideon the Ninth.  Her short fiction has been nominated for the Nebula Award, the Shirley Jackson Award, the World Fantasy Award, and the Eugie Foster Memorial Award.  While Gideon the Ninth is her first novel, her signature style and interests infuse the novel with talent and easily draws readers into a world featuring all her favorite genres.  On top of science-fiction, horror, and fantasy, Muir also injects a dose of romance between confused young women in a world where tenderness is nigh unheard of.

Gideon the Ninth takes place in a far-flung future, far off in the galaxy.  A galaxy spanning empire rules much of known space, although an exact measurement is never provided.  The main character, the titular Gideon, only knows a confidence in the power of their empire.  However, this empire does maintain an active military, hinting that their dominance in space is not absolute.  This is a future and a society where all things revolve around the practice of necromancy.  The Deathless Emperor has ruled since the founding of the empire, kept alive and immortal through mysterious magics.  His inner circle shares a thread of this immortality, although their losses prompt the main plot of the novel.  Nine noble houses vie for power and favor, each practicing a different form of necromancy.  The Ninth house, home of Gideon, specializes in the raising of animated skeletons, who perform all manner of manual labor.  Gideon is one of only two young women in the Ninth house, and one of the few non-undead citizens of their planet.  Desperate to be free from decay and death, she unwillingly becomes the cavalier to Harrowhawk Nonagesimus, heir to the Ninth house and one of the most powerful young necromancers.  Together, they face other necromancers and undead monsters in an effort to win the favor of the Deathless Emperor and solidify their place in the galaxy.

Gideon is both a typical and yet atypical protagonist for a science-fantasy novel.  She is rash, cocky, and overconfident in her abilities.  Not without reason.  She has been highly trained by the soldiers of the Ninth house, and favors a more direct, brutal fighting style.  Finesse serves no purpose, in her eyes.  She is not the smartest person in the room, preferring to break down a door rather than picking the lock.  Yet, Gideon becomes utterly fascinating when placed in the context of her world, where dead things walk alongside the living and decay is everywhere.  Despite her harsh circumstances, Gideon never stops being herself.  She is confident, foul mouthed, dirty minded, butch, and utterly direct in her thoughts and actions.  At the start of the novel, she tries desperately to escape the Ninth house, and nearly succeeds, before being dragged back down by Harrowhawk.  She teams up with the necromancers not out of loyalty, but by making a deal to finally win her freedom.  She is far from a static character, however, growing and evolving as the story progresses and finding a greater purpose for her life.

Harrowhawk, or Harrow, is just as much a main character as Gideon is, although the vast majority of the novel is told from Gideon’s third-person point-of-view.  There are a few moments when the narrative gives us a better look into Harrow’s mind, and what is found there rarely reflects the exterior shell.  Harrow appears to be cold, calculating, and cruel, and with good reason.  She is all of those things, but hides her emotions and other aspects of her personality, like the underwater portion of a glacier.  Her coldness and cruelty are born of necessity.  From what we see and hear of the Ninth house, her home, it was not a pleasant place to live or to raise a child.  Harrow learned from a young age that necromancers are needed, respected, and utterly reviled.  We eventually learn more of her upbringing, and it is a wonder Harrow did not turn out worse than she is.  Despite all this, she seems to genuinely care for Gideon and consider the cavalier her only friend.  Growing up as she did, she has no concept of how to express these feelings, instead resorting to bullying Gideon harshly.  We see Harrow’s transformation over the course of the novel right in front of Gideon’s eyes, revealing a wonderfully complicated young woman.

Decay and rot are everywhere in Gideon the Ninth, forming one of the book’s best unspoken themes.  We do not see much of the empire, but what we do see appears to be falling apart.  The planet of the Ninth house is in utter disrepair.  Most of the population exists in some form of undeath, or with lives naturally and gruesomely extended through necromancy.  Harrow’s own parent, the heads of the house, are nothing more than zombies controlled by Harrow.  While she works to hide this level of decay from the rest of the empire, it is clear sometime is very wrong.  The main setting of the novel, a castle owned by the Deathless Emperor, is almost entirely staffed by skeletons.  There are hardly any other people and we never hear of civilians just living their lives.  The food served is unappetizing, dust covers everything, the wooden furniture rots, and sections of the building are falling into the sea.  While extreme, this decay represents the empire as a whole and showcases the unwavering, delusional beliefs of its citizens.  Even technology has faltered, with spaceships being common but firearms existing only as a lost technology.  In a society so focused on necromancy, all other things have fallen apart.

The book reviewer Charles Stross had one of the best descriptions of the novel, so good that it is printed on the cover of the hardback.  “Lesbian necromancers explore a haunted gothic palace in space!  Decadent nobles vie to serve the Deathless Emperor!  Skeletons!”  But there is so much more to Gideon the Ninth, although I will not spoil anything as this book deserves to be read.  Gideon is a fun character in a world of rather dreary side characters, and provides a necessary outside perspective to the plot’s events.  A sequel is already in the works and scheduled to be released this year.  However, this time, Gideon will take a step back and let Harrow have her chance to shine.

Gideon the Ninth can be found in store, online, or wherever books are sold

Next on the List: The Bone Ships, by RJ Barker

One thought on “Immortal Cavalier: A Review of Gideon the Ninth, by Tamsyn Muir”