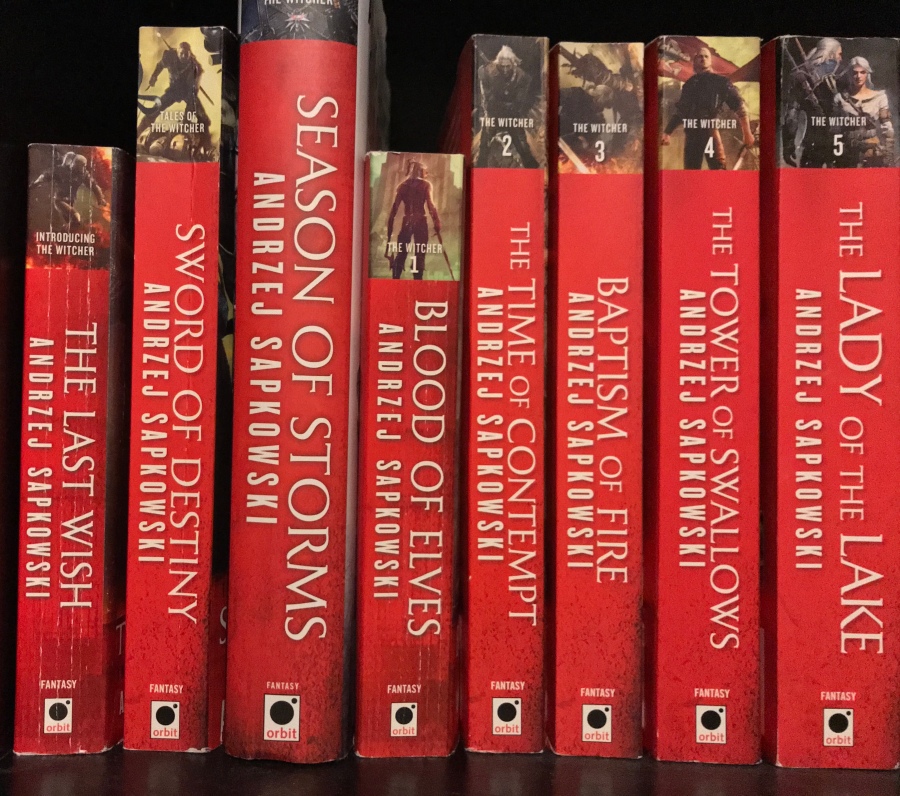 While Andrzej Sapkowski published his first Witcher short story in 1986, the series certainly did not end there.  After a couple years and two collections of short stories later, Sapkowski introduced the world to what would come to be his magnum opus; the saga.  Beginning with the first fill novel set in the Witcher universe, Blood of Elves, the saga would occur across a series of five lengthy novels, all following the adventures of Geralt of Rivia, Yennefer of Vengerberg, and Ciri as they navigated a dangerous world.  While introduced in the short stories, we spend much more time with these characters in the novels and see new sides of them.  Hinted in the final two short stories, Sword of Destiny and Something More, the saga confirms that the tale belonged to Ciri all along, and she shares equal page time as Geralt.

Blood of Elves opens roughly one year after the final short story, Something More, showing Geralt and Ciri united at last and heading to Kaer Morhen, the castle of the witchers.  The Kingdom of Cintra, once thought to be the strongest kingdom in the north, was utterly defeated and conquered by the Southern Empire of Nilfgaard.  In the chaos, the Queen of Cintra and Ciri’s grandmother, committed suicide after ensuring the girl escaped the carnage.  Nilfgaard was later stopped during the Battle of Sodden Hill by a united coalition of the northern kingdoms and the Brotherhood of Mages.  After a year of living with the witchers, rumors of Ciri’s survival have reached the ears of those in power.  Originally thought dead, her survival could complicate the strenuous peace between the South and the North.  Agents of the Nilfgaarden emperor, Emhyr var Emreis, wish to capture her and marry her to the emperor.  Through marriage, the empire could be seen as legitimate rulers of Cintra.  Desperate to maintain their hold on the North, the king’s coalition plan to instigate a war on their terms, and kill Ciri before the South can get a hold of her.  For reasons of state.  Meanwhile, in the shadows, a deadly mage hunts for the girl for reasons known only to his master.

Cirilla Fiona Elen Riannon, known by those who know her as Ciri, is given new attention in Blood of Elves as she becomes just as much as a main character as Geralt.  Although they receive roughly equal time on the page, with the novel transitioning between their third-person point-of-views, the plot revolves around Ciri.  Geralt works in service to her, to keep her safe, and to stop anyone hunting her for any reason that is potentially harmful to her.  When we first meet her, Ciri is only about twelve years old, and plagued by nightmares of the fall of Cintra.  Under the tutelage of the witchers, she compartmentalizes those fears and shows herself to be willful and just as thick-headed as hew new adopted father.  In many ways, she takes after Geralt and, through her, we see what he may have been at that age.  The story never forgets that, for all her hardships, Ciri is still a princess and a lady.  While she trains with the witchers in the way of the sword and combat, the women in life ensure that her education is well rounded.  The world of the Witcher is not especially kind to women, and we see Ciri start to realize that and refuse to conform to what the world wants from her.  In the witchers, she sees an ideal of strength and freedom, and through Yennefer she sees a freedom through power.  In Blood of Elves, Ciri is young and still has a lot of growing up left to do.

Prior to Blood of Elves, Geralt of Rivia was our sole viewpoint into the world of the mutants known as witchers.  Everything we knew about the monster hunters was spoken by him and filtered through his perceptions.  Multiple times, he talked about how becoming a witcher killed all emotion, and then proved that incorrect.  With the first novel of his saga, Sapkowski showed us a diverse array of witchers.  Once Geralt and Ciri arrive at the stronghold of the witchers, the crumbling castle of Kaer Morhem, her training begins in earnest under the supervision of Vesemir, the oldest witcher left alive.  Although he resembles an old man, is it clear he has not lost his touch as it is his job to train all new witchers, as infrequently as that occurs.  He has long since retired from active monster hunting, and is the only permanent resident of Kaer Morhem.  On the opposite of the spectrum is Lambert, one of the youngest witchers although plenty experienced.  He comes across as more opinionated and almost rude.  Eskell is a more experienced witcher, only slightly younger than Geralt, and his scarred looks do not accurately portray his polite demeanor.  There is also Coën, a witcher normally operating in far off lands, who appears to be genuinely kind and spends most of his time with Ciri.  Far from the merciless and heartless charlatans most people believe them to be, the witchers genuinely love and care for Ciri.  The only problem being that they have no idea how to raise a twelve-year-old girl aside from teaching her their ways and ensuring she will always be able to protect herself.

While Ciri trains with the witchers in isolation, and later enrolls in a temple school under a false identity, the world does not stop moving.  Politics, and how it affects the common people, has always been a focus in the witcher stories, but is brought to a new prominence in Blood of Elves.  Sapkowski makes sure to include several interludes from the temporary points-of-view of other characters in the Northern Kingdoms and Nilfgaard, so that readers can understand the larger machinations at play.  While Ciri lives her life in relative peace, powerful people search for her and their spied murder to get a hold of her.  Dandelion, the not-so-humble bard, is even captured and tortured early in the story for information.  It is only through the timely intervention of Yennefer that he is saved without revealing anything.  While the South strategizes for the war they know is coming, the North holds frank discussion on economic warfare and trade.  We even meet the spies who perform the dirty work required by these political entities.  Far from treating politics like a joke or a distraction from the main plot, Blood of Elves stands in stark realism by showing how the decision of those in power trickle down to the common man.

Another theme found in the Witcher series, a foundation that has been present since the beginning, is bigotry.  While the main characters are all human, humans are far from the only sentient race inhabiting the Continent, the setting of the stories.  Before humans arrived in this world, the land was ruled by elves, dwarves, gnomes, halflings, dopplers, and more.  By the time of the stories, humans reign supreme and have forced most other races off their ancestral lands.  Discrimination is rampant and encoded in law.  Some kingdoms even force non-humans to live in slums or ghettos.  Elves suffer worst of all due to their dwindling population.  Originally the most powerful dominion, they slowly lost war after war to the humans and, due to their difficulty in reproducing, were not able to keep up with the spread of humanity.  Dwarves, gnomes, and halflings fare slightly better due to their control of the city of Mahakam.  Technically under the dominion of the kingdom of Temeria, Mahakam is an economic powerhouse of its own right.  Due to the widespread bigotry towards non-humans, it is no surprise that Blood of Elves introduces the Scoia’tael, a growing militia of marginalized peoples fighting against human cruelty.  Secretly backed by Nilfgaard, the novel goes to great pains to show that, while they are motivated by hate and grief, the Scoia’tael are partially justified in their guerilla war.

As the first novel of the Witcher saga, Blood of Elves did something amazing.  Sapkowski took a world which, up until then, had only existed in short stories, and proved it could sustain a series of long novels.  The saga is not short.  Consisting of five novels, each novel is three hundred pages or more.  Yet, momentum is never lost as we follow the adventures of Geralt, Yennefer, and Ciri as they struggled to find each other and stay together.  While this first novel can be a bit dense, as it does have to do a lot of work to reintroduce characters and set up the world for the remainder of the books, it is an excellent start.  The second novel, The Time of Contempt, continues the saga and, in many ways, sets up what will become the main conflicts of the Witcher.  There is a reason why the popularity of the Witcher never seems to fade, and this saga proves time and again why we all love Ciri, Yennefer of Vengerberg, and Geralt of Rivia.

Blood of Elves can be found in store, online, or wherever books are sold

Next book in the series: The Time of Contempt, Book 2 of the Witcher saga