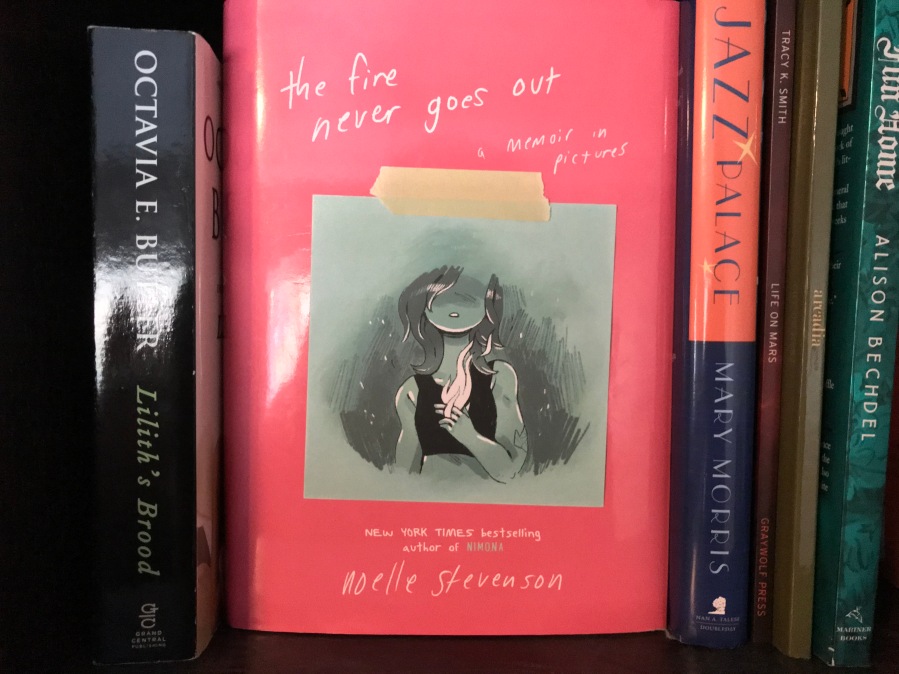 Memoir; from the French mémoire.  A memory.  Unlike a biography, which tends to be a relatively straightforward look at a person’s life, a memoir consists of their collected memories.  It may be presented in chronological order, order of most importance, or how each memory leads into the next.  As long as people have been committing words to writing, they have written memoirs.  From the ancient world, to the modern, memoirs have only grown in popularity as a way to pass down one’s own legacy.  Not all of us are destined to become legendary poets and writers, many people are forgotten as time passes.  But a memoir can be an extension of a life.  The Fire Never Goes Out: A Memoir in Pictures is what is known as a graphic memoir containing both her words and her artwork in a masterful combination.

My first exposure to Noelle Stevenson and her work was back in 2014.  As the youngest person enrolled in Sarah Lawrence College’s MFA creative writing program, I prided myself on being more interested in popular than literary fiction.  When given the change to take a comic book writing course (taught by Scott Snyder, no less), I jumped at the chance.  As part of the class, we were each to recommend a comic book that could then become part of the curriculum.  I no longer remember my own choice, but a good friend selected Lumberjanes, cowritten by Noelle Stevenson.  I only read the first issue, thinking my interests lay elsewhere.  Fast forward to a couple years later, and I began watching Critical Role, a web series where a bunch of nerdy-ass voice actors play Dungeons & Dragons.  And suddenly Noelle Stevenson was a guest, appearing in several episodes.  Still, I thought her work was not meant for me.  Fast forward a few more years, and I still had not watched her new show, She-ra and the Princesses of Power, believing I was not the target audience.  However, when I learned that her graphic memoir was being published, I decided to finally take a look.  After getting the book in the mail, I decided to familiarize myself with her work.  I decided to buy Nimona, I decided to watch the first episode of She-ra.  I read Nimona in a day.  I watched the current four seasons of She-ra in a week.  I read her memoir in a weekend.  As it turns out, it was meant for me.

The Fire Never Goes Out begins the journey in 2011, long before the fame and the planting of a legacy.  Stevenson takes her readers year-by-year, providing an emotional chronicle of ups and downs, fire and ash, steeps climbs and treacherous falls.  In her memoir, she strips away the false perceptions and peels back the layers in order to reveal her humanity and honesty.  From the outside, her life could look perfect.  Astronomical success at a young age, a tremendous climb from webcomics to running a Netflix show, and what could very be a truly blessed marriage to Molly Ostertag.  However, as with most people, what is shown on the surface level is not always reflected internally.  It is often said the majority of the iceberg lays under the sea.  Stevenson allows readers and fans to see her struggles and anxieties throughout the year.  Through her writing and her drawings, we empathize with every breakdown and every push forward.  But Stevenson does not tell us everything, and she does not need to.  We do not need to know every thing that has happened in her life, not do we need to know exactly what caused turmoil in her life.  It is enough to see that she is human, that is ok to struggle, and that it is ok to feel.

I would be remiss to write about a graphic memoir and not discuss the art style, although I am by no means an art critic.  Stevenson’ style trends toward the simple and the essential.  With only a few lines, the right amount of shading, and the tiniest of facial expressions, she is able to convey the entire range of emotion.  The art and the writing are there to get the point across and make the reader feel what she wants us to feel.  Small lines or slightly larger eyes can show us a world of anxieties, while true happiness is expressed in a small smile, arms outstretched, or floating hearts.  The plain white background throughout the book also serves a very important purpose.  It keeps us focused on the raw emotions and memories carried across the page.  To fill it up would only take away from the experiences shown to us.  Color, while used sparingly, also works in concert with everything else.  The lack of color could partly be due to the added difficulty of using it, but it is more likely to say that color is saved.  A black and white image suddenly becomes evocative when only the fire is red, and a bit of pink on a face turns a static image into an expression of contentment.  We also get to see Stevenson’s transformation over the years unfold, her self-portrait ever shifting as her identity settles into place.

While this review is meant to be about The Fire Never Goes Out, my reading Stevenson’s memoir was only part of the experience.  Before opening the first page, I read Nimona in a day.  I had heard of her comic before, but it had never been on my reading list before.  Once I opened the book, I could not stop until turning the final page.  A graphic novel, Nimona is Stevenson’s earliest published work and originally began as a school project.  While it begins as a simple, comedic comic strip, it evolves into something much more evocative and emotional as the pages turn.  It also sets certain trends which Stevenson has remained true to.  While not explicit, Nimona provides a casual acceptance of non-heteronormative expression and normalization of lgbt life.  The female characters are not “strong,” they feel real.  In many ways, Nimona began the trends which She-ra and the Princesses of Power relishes in, the current culmination of Stevenson’s art.  There are struggling heroes, villains motivated by understandable emotions, and a world without sexism.  There are characters which everyone can identify with, both positively and negatively.  While it is a show meant for children, it understands that children are not stupid.  They are in the middle of their formative years, and the storm raging inside is not going to settle anytime soon.

There are certainly lessons to be learned from The Fire Never Goes Out, from seeing how one person came to live alongside the endless flames.  For some people, not just endlessly creative people, the fire truly never goes out.  We see this in artists who never stop creating, from businessmen who never stop working, from doctors who cannot help but continuously save life.  The fire is always there, always burning away and producing the heat that can warm or burn the people around you.  The fire is without end, and can threaten to consume you if allowed to burn out of control.  Sometimes, you just need to survive the impending immolation to come out the other side, scorched but alive.  Other times, the fire burns too hot, too quickly and expends its fuel until only smoldering ash remains.  But it never goes out, not really.  Eventually, you find something else to feed the fire.  But just as it is ill advised for a starving person to gorge themselves, the fire must be stoked carefully.  Fire is never good nor evil, it is natural.  It is a part of us and can keep us warm, heal, and provide safety.  It can be a struggle to keep the fire both fed and under control, but it can be well worth it to find that balance.

If a memoir is a way of passing down one’s legacy, what is a legacy?  According to Hamilton, an American Musical, building a legacy is “planting seeds in a garden you never get to see.”  While Noelle Stevenson is still planting her garden, the seeds have already begun to sprout and produce nourishment for her audiences.  Through her art, the garden feeds the young and the old, while welcoming all people to share in the bounty.  In the center lays a fire, open to all, and inviting us to take an ember and stoke our own flames.

The Fire Never Goes Out: A Memoir in Pictures can be found in store, online, or wherever books are sold

Nimona can be found in store, online, or wherever books are sold

Next on the List: Crush the King, by Jennifer Estep