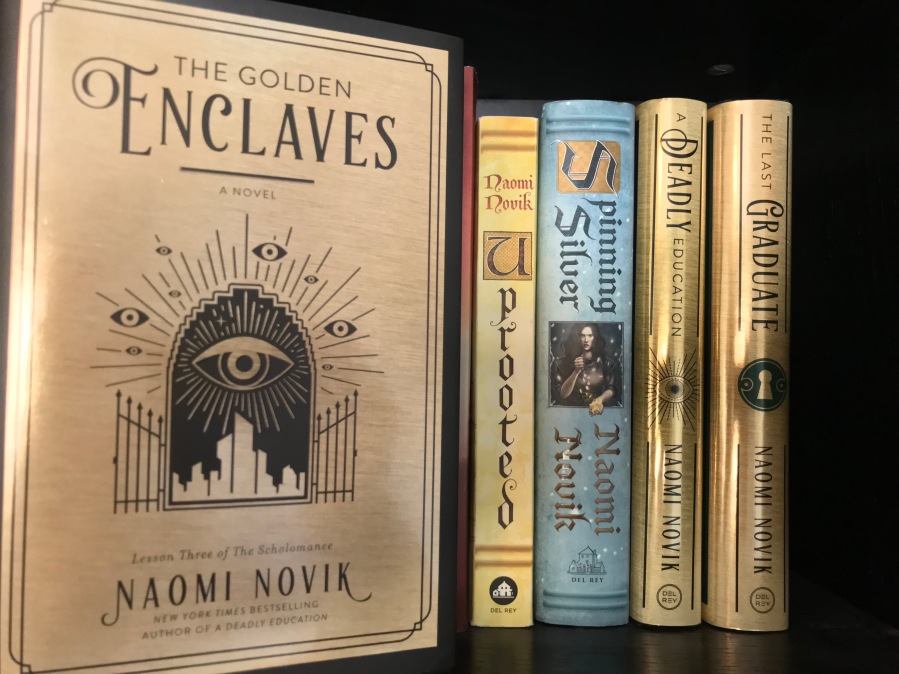 It can a difficult task to introduce an entire world or setting in a fiction novel, or really any fictional story medium.  We see the cracks especially in movies, when taking the time to fully immerse an audience in a world can end up slowing down the pace, while skipping over world-building can lend to a feeling that things do not make sense.  Books, on the other hand, allow for other options, specifically in a multi-book series, such as a trilogy.  Some series, such as Naomi Novik’s Scholomance trilogy, take the path of keeping the setting relatively contained at first, then opening up the world to the readers and characters as a payoff after spending so much time immersed in a single locale.

With The Golden Enclaves, Novik’s excellent Scholomance trilogy has come to an end.  If you have been following the series, The Golden Enclaves provides a satisfying and logical conclusion to the story of El and her friends, newly escaped from the eponymous school in which the first two books were set.  This novel opens up immediately after the ending of The Last Graduate, with Galadriel “El” Higgins and her classmates escaping from the school, along with every other student present.  Leading the entire school in a crazy plan, the students managed to lure nearly every monster in the world into the school, keeping them occupied while the students filtered out, before spinning the school off into the void.  Unfortunately, in one last show of self-sacrifice, Orion Lake, El’s love, jumped in between her and a devastating maw-mouth, remaining trapped in the school to be digested for all eternity.  The Golden Enclaves takes everything the characters have been through, and everything we have learned about the world, and provides an ultimately satisfying payoff that continues and escalates through every page.

Novik performs the amazing feat of jugging several plot threads and not letting any of them fall to the wayside as the story progresses.  In fact, every plot thread is equally important because El and her friends all care about them equally.  It is also clear from the first page that every plot thread will be connected, but knowing that does not ruin any of the surprises of the novel.  Continuing from the previous novels, El is still in possession of the golden sutras, a book of spells for creating new magical enclaves, safe from the mundane world and the monsters that are constantly hunting mages.  However, without Orion, El has fallen into a depression, remaining at home instead of travelling the world like they had planned.  Meanwhile, a mysterious maleficer has apparently taken her place in a prophecy to destroy the existing enclaves, releasing maw-mouths throughout the world.  On top of that, El and her friends quickly realize they much return to the Scholomance so El can kill the maw-mouth which has consumed Orion Lake, allowing him finally die.

Just as important as the actual events of the plot is how these story threads affect El’s mental state throughout the novel.  In a way, the main conflict of the story is not how she is going to defeat the monsters of stop the villain, but how she is going to deal with the trauma she has experienced.  Wisely, Novik also takes the time to show us that El is not the only person adversely affected by the events of the story, both in this novel and the preceding two.  Every character is dealing with their own damage, and dealing with it differently.  Since the Scholomance trilogy is told entirely from the first-person point-of-view of El, we spend every moment with her, seeing her interior monologue and experiencing her reactions to everything and everyone she sees.  So we see that, despite her prickly and brusque exterior, El will always choose the path of altruism, even if the people she is helping do not necessarily deserve her help.  As we have seen over the preceding two novels, El is immensely powerful and embodies the idea that with great power there must also come great responsibility.

With the previous two novels in the trilogy, A Deadly Education and The Last Graduate, the action was restricted to the Scholomance itself, with each book taking place over the course of one school year.  We are only able to hear about the outside world through El’s perception of her home and what she has been told, either in the past by her mother or by the people she met within the school.  With the beginning of The Golden Enclaves, however, we are back out in the real world.  And, the world of this story is incredibly cruel and dangerous for mages.  For millennia, magic users have lived in enclaves, magical spaces pushed out into the void.  Monsters in this world seem to be naturally attracted to magic, and are constantly hunting for mages.  The enclaves are safer than living in the mundane world, but not perfect.  As we hear through El, the mortality rate for magical children is incredibly high.  This is also the first time we are meeting adult character in the series, characters who have been dealing with the cruelty of the world for far longer than El and her friends.  Through them, Novik does a wonderful job of showing how people in that situation can reasonably act like villains while also remaining sympathetic.

One of the themes of the Scholomance trilogy has been finding other options when presented with multiple choices.  More than any person or monster, the main antagonist of the series is the system mages have created for themselves and pushed onto the magical world.  The Scholomance itself is one such example of this system, and the first two books are all about El finding ways to break the system to the betterment of everyone within it.  Part of the purpose of a constructed system is to reinforce itself, resisting any changes that fundamentally alter the purpose of the system.  The Golden Enclaves takes that running theme and applies it on a macro level to the entire world.  El is constantly being presented with choices by the adults who have lived outside the school for decades, being told that the options provided are the only options available.  However, it takes someone from outside that system to fully understand that there are always other options, other choices to make.  Sometimes, you need someone from outside the system to come in a break it, allowing people to act on the knowledge that there is a better way to do things.

The Scholomance trilogy has been a treat to read, especially for readers who discovered Naomi Novik through the excellent standalone tales Uprooted and Spinning Silver.  She absolutely sticks the landing of this three-book experience, carried by the always fun first-person narration of El.  With plenty of twists and turns, The Golden Enclaves keeps its momentum as the characters navigate the wide world outside the school, taking us along for the ride with every line and page.  Readers who have stuck with it will find a satisfying finale to this fun and exciting story.

The Golden Enclaves can be found in store, online, or wherever books are sold

Next on the List: The Cosmic Ballad of Layla and Airy, by Mira Ong Chua