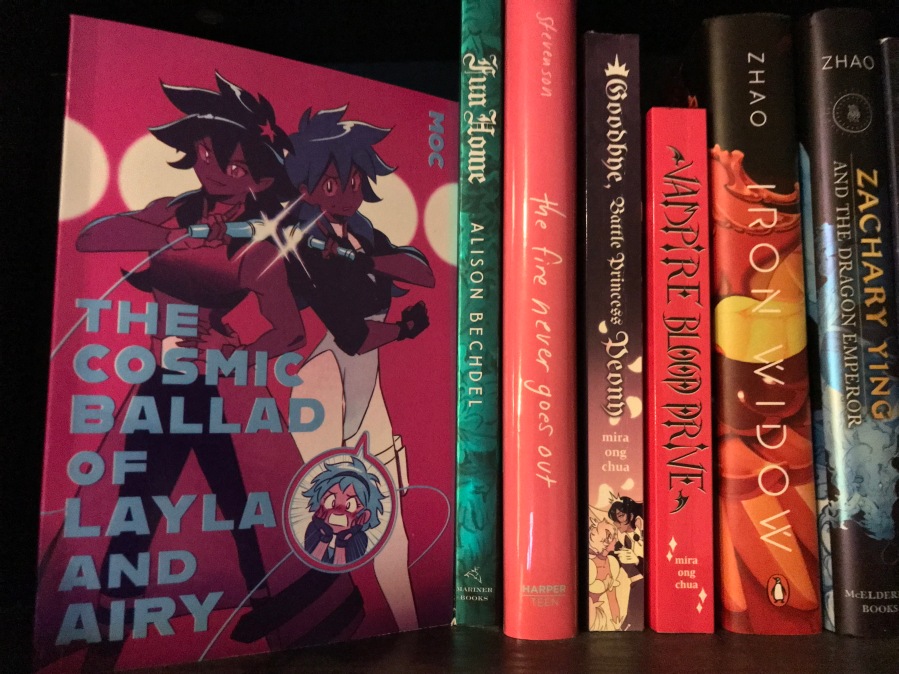 Be careful what you wish for.  That is the lesson of nearly every story where wishes, magical or otherwise, play a central role in the plot.  Inevitably, the wish in question presents the characters with some sort of unforeseen consequence brought about by the nature of the wish.  Usually this is something the character who made the wish simply did not think of, such as missing the ramifications of wishing for a million dollars.  Sometimes stories like this lean into horror territory, such as the 1902 short story, “The Monkey’s Paw,” by W. W. Jacobs.  Other times, the story is meant as a lesson of some sort for the reader, a common occurrence in fairy tales and folklore.  Most stories about wishes tend to lean towards the dramatic, for obvious reasons.  But there is no reason a skilled storyteller cannot have a bit of fun with the concept instead.

I have covered Mira Ong Chua’s previous two comics—Vampire Blood Drive and Goodbye, Battle Princess Peony—on this blog, and it is delightful to write about her most recent comic as well.  The Cosmic Ballad of Layla and Airy is a short, fun story tale of a galactic treasure hunter, a famous popstar, and a wish gone wrong in just the right way.  Compared to her last few comics, The Cosmic Ballad of Layla and Airy is a very short read, only taking an hour or two to read through.  However, Chua is firing on full cylinders here, resulting in a story that is nothing less than condensed fun from the very first page.  From her expressive art style to her fantastic character designs to her mastery of romance, this is one comic you cannot miss out on.  With the lower page count, is also works as a great introduction to Chua’s other works.  Striking the right balance between drama and fun, her comics are always such a joy to read through.

Set in a futuristic science-fiction setting spanning multiple planets and solar systems, The Cosmic Ballad of Layla and Airy follows the life of famous galactic treasure hunter, Layla Lowlight.  Already a celebrity in her own right, Layla is in search of the Legendary Wishgranting Wand, which does exactly as described.  Like many protagonists before her, Layla’s motivation for wanting to make a wish are far from altruistic.  Knowing that the wish will transport itself to another, random location in the galaxy when the wish is used, Layla still wishes to become the richest person in the universe.  Instead of simply giving her wealthy, however, the wish transforms her into the doppelganger of Airy Highlight, the biggest popstar in the galaxy.  Shenanigans ensue when Layla, now going by Layle, is immediately mistaken for Airy and pressganged into becoming his body double, even going so far as to perform on stage for him.  Of course, this would not be a Chua story without a budding romance, and the romantic triangle between Layla, Airy, and Layle is the perfect comedic setup.

At first, Layla and Airy seem like total opposites in terms of personality, but we quickly learn that, while the focus of their lives is certainly different, they are actually very similar in other key aspects.  Such as holding a dream tightly and trying to pursue it as best they can.  As the story progresses, more and more connections are established as the two spend all their time together as Layle and Airy.  This comic is an example of character develop doing a speed run.  Given it’s short length, the comic has to make a lot of progress with very few pages, and Chua handles it excellently, utilizing montages when necessary, peppered with more dramatic scenes.  While Airy’s crush on Layla is revealed early on, the inevitable twist occurs when Layla, as Layle, starts to develop feelings for Airy as well.  The dynamic of being caught in a love triangle with yourself is a very fun trope, although it carries with it a bittersweet touch as well that helps balance the comedy with a pinch of drama.  The characters have always been a strength of Chua’s storytelling, and Layla and Airy remain fun to spend time with throughout the story.

If one had to only pick a single signature aspect of Chua’s storytelling, I would choose the importance she places on queer relationships and romance.  Chua’s stories have historically focused on lesbian relationships, although each tale includes gender nonconforming characters as well.  In her settings, being queer is treated like it should be treated in the real world: as a totally normal thing not deserving of bigotry or discrimination.  While some of her comics have presented obstacles to the characters’ romance, those obstacles have never been based on their sexual orientation or gender identify.  Even a story like The Cosmic Ballad of Layla and Airy, which features a male/female pair of main characters is full of queer identity.  Layla is transformed into a male body as part of her wish, but still retains her sexual orientation even in the new form.  Airy, meanwhile, begins the story with a crush on Layla but, by the finale, has realized he had feelings for Layle all along.  In these pages, we can see an ideal for the real world and how queer identities and relationships should be treated.  Love is love, after all.

The only criticism I could levy at The Cosmic Ballad of Layla and Airy is that it is too short!  The story of these two characters ends on an incredibly fun cliffhanger after a grand finale, and you can tell that Chua has so much more story to tell, if she chooses to tell it.  Given the short length, this comic hammers home character beat after character beat, moving with a great pace that will ensure you read the entire story in one sitting.  Every page is thoroughly enjoyable, and Chua’s art will never become tiring to me.  Thankfully, it will not be too much longer until Chua’s next work is released, but one can hope that she eventually returns to tell more stories with Layla and Airy.

The Cosmic Ballad of Layla and Airy can be found on Mira Ong Chua’s online shop, miraongchua.shop

Next on the List: Extreme Vetting, by Roxana Arama