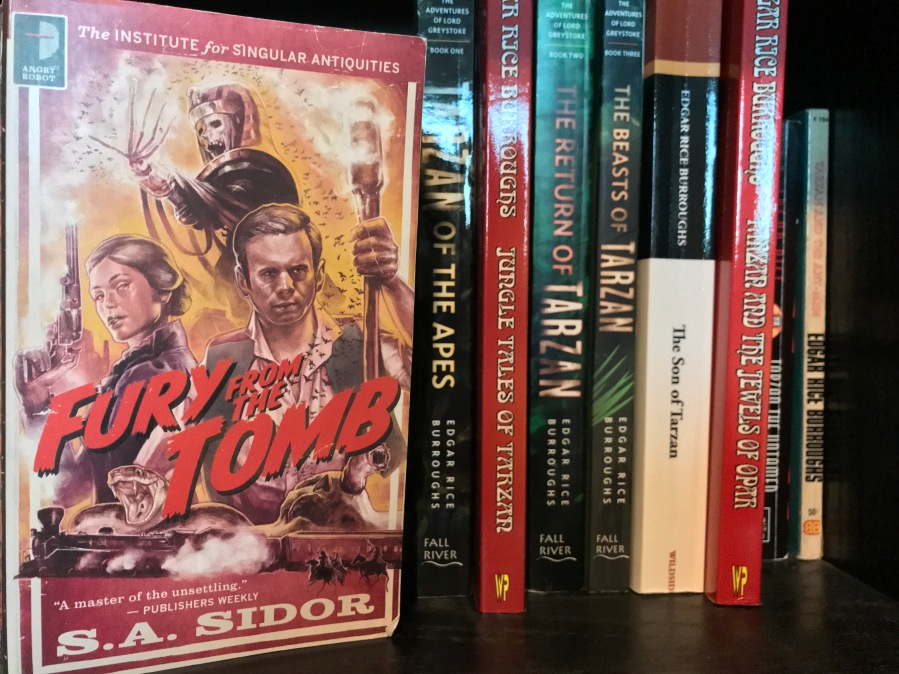 Pulp fiction is a relatively new genre of fiction, originating in the late eighteen-hundreds, at the height of Western colonization.  The sun never set on the British empire, and they (along with the Americans) ransacked the world in an endless hunt for artifacts and remnants and ancient civilizations.  None of them held a greater allure than Egypt.  While the genre was popularized by Indiana Jones, it predates the archaeologist by many years.  The tales of Allan Quartermain and She: A History of Adventure by H. Rider Haggard really brought pulp fiction into prominence.  Ancient tombs and treasures were being discovered every day, and the world was much larger than it is today.  At the turn of the century, the Western world became obsessed.

Pulp fiction today is not nearly as popular as it once was, despite Harrison Ford and Brendan Fraser’s best efforts in Indiana Jones and The Mummy.  However, many elements of this genre have been adapted into fiction.  Anytime a story features a hidden tomb filled with traps and the promise of treasure, thank the rise of pulp fiction.  Likewise for a mostly realistic story which introduces one or two supernatural elements, to the great surprise of the main characters.  Pulp fiction as it was a hundred years ago may be mostly dead, but the genre has evolved.  S. A. Sidor’s Fury of the Tomb is a modern work of pure pulp fiction and a love letter to that genre, which also leaving behind many of the outdated elements.

Fury of the Tomb follows the story of Rom Hardy, a wannabe Egyptologist who has never been the Egypt, much less left the United States.  He is lacking both morals and a sponsor, which makes him a good choice the wealthy industrialist Montague Pythagoras Waterson who, more than anything else in the world, wants a mummy.  Hardy travels to Egypt and begins excavating without a permit, eventually hiring a team of graverobbers to help him find a tomb and steal mummies, by nearly any means necessary.  Unbeknownst to him, Waterson is haunted by a mysterious figure in his dreams, and provides Hardy a map to a tomb thought to be cursed, housing the dark priest Amun Odji-Kek.  In the processing of recovering the mummies, Hardy’s guide and the graverobbers are killed by another of Waterson’s hires.  The novel then follows Hardy as he tries to escort the mummies to Los Angeles, and the adventure really begins when the train is attacked and bandits take the mummies into Mexico.  While all this happens, Odji-Kek wakes up and begins his own plans to conquer the world.

Although the story is told exclusively from the first-person point-of-view of Rom Hardy, he travels with a group of other equally important characters.  Arguably, Evangeline Waterson, daughter of the industrialist, is the most important of this group.  Not completely trusting of her father, she takes it upon herself to join Hardy’s journey across the US with the mummies and try to learn more about what makes them special.  Their character types are common in pulp fiction, but both manage to break stereotypes.  Hardy is the archaeologist, but he never becomes a true adventurer or action hero, although he does have a few moments.  Evangeline never needs rescuing and also resists becoming the nurturing figure of the group.  Reading this novel, you can tell that Sidor did not want to carry the same outdated tropes that pulp fiction is known for.  There is no damsel in distress, no unlikely action hero.  The two characters also do not become a couple at the end of the story, although romance is hinted at.

The other two members of the posse are Yong Wu and McTroy.  Yong Wu is the child of Chinese-American rail workers, and encounters Hardy and Evangeline before the train is attacked.  Initially portrayed as an orphan teen, we eventually learn that his parents are actually undead vampires, following his shadow and killing anyone who would try to harm him.  Sidor does not make Wu speak in an accent on the page, and never treats him like the pulp stories of old would.  Fiction was not kind to Asians and Asian-Americans at the turn of the century.  Far from a stereotype, Yong Wu is a fully realized character and the emotional core of this story.  Contray, McTroy is almost stereotypically male.  A tough-guy bounty hunter hired by the group, willing to do whatever he needs to take down the bad guys.  However, even McTroy reveals other sides of himself.  He cherishes his horse, and eventually becomes a father figure to Wu as they bond throughout the story.

There are several villains in Fury of the Tomb, with Amun Odji-Kek being the leader.  Unfortunately, the villains are where the novel lags a little.  Odji-Kek channels Imhotep from the Brendan Fraser Mummy series, but is much more one-dimensional, wanting to take over the world and not showing any other personality traits.  With him is El       Gusano and the Necrofagos, intelligent cannibal ghouls haunting the desert.  Along with evil, demented monks, these are the only Mexicans we meet in the story despite most of the novel taking place in Mexico.  They are portrayed as almost comically evil and, while they do make for fearsome villains, this is where some of the old racism pulp fiction is known for bleeds into the novel.

Fury of the Tomb did not, unfortunately, begin a new Renaissance of pulp fiction literature.  However, it did help show that the interest in these types of stories is still very much present.  We have seen more and more of it in film, and authors are beginning to see the entertainment value in nostalgic, pulpy stories.  Pulp fiction stories will never be mistaken for literary fiction, and they were rarely groundbreaking, but there will always be room for fun.

Fury of the Tomb can be found in store, online, or wherever books are sold

Next on the List: Protect the Prince, by Jennifer Estep